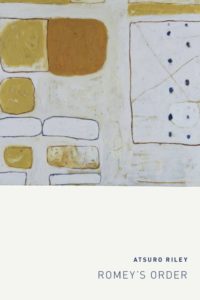 Romey’s Order is an indelible sequence of poems voiced by an invented speaker called Romey, set alongside a river in the South Carolina lowcountry. As the word-furious eye and voice of these poems, Romey urgently records–and tries to order–the objects, inscape, injuries, and idiom of his “blood-home” and childhood world. Sounding out the nerves and nodes of language to transform “every burn-mark and blemish,” to “bind our river-wrack and leavings,” Romey seeks to forge finally (if even for a moment) a chord in which he might live. Intently visceral, aural, oral, Atsuro Riley’s poems bristle with musical and imaginative pleasures, with story-telling and picture-making of a new and wholly unexpected kind.

"Pure joy on the level of the syllable, pure music on the level of the phrase, and pure integrity on the level of the form. . ."
SUSAN STEWART
"Amazing and indelible, a brilliant work."
FRANK BIDART
"Atsuro Riley has an uncanny and unparalleled ability to blend lyric and narrative modes. . .his style and language are fresh and inventive, thrillingly attentive to the intonations of speech, to the textures of sound and syllable."
The WHITING AWARDS
"The best literature forces you out of your old eyes and that's what happens here. Atsuro Riley's Romey's Order is deep craft--brilliant and consuming and thoroughly strange. When you put this book down, American poetry will be different than when you picked it up."
KAY RYAN
"Astonishing and original . . .fuses feeling with thought. In tracing memories, Riley doesn’t so much recover the past as he joins memories and the very process of memory itself into a new, vivacious action. The tension between the world of fact into which each of us is born and the desire to forge our own new worlds results here in beguiling music, a music that brings these poems alive, with all their sinew and subtlety."
PETER CAMPION
"Indelible first-book masterpiece. . .Riley’s evocative abilities are flat-out astonishing. The relation of object to locale to cadence to mood—the relation of language to the actual experience of perception—is 100 percent pitch-perfect here. A blast of fresh air for poetry."
THE BELIEVER
"Riley’s poems are saturated with the tastes and textures, the heft and drag and slippery joys of words-as-things. Words strung with gut and weighted down with quarried stone. Words leavened and baked in local ovens. Language you can chew. He is a fabulous latter-day incarnation of Gerard Manley Hopkins, for whom the material world— everything that flies and creeps and burrows and shimmers —and the material world of words are the substance and occasion of unending praise."
KATE TUFTS DISCOVERY AWARD